The Isley Brothers: Superstars For Every Generation 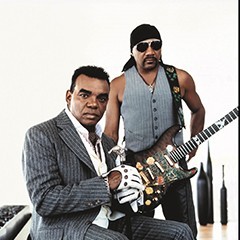 Back by popular demand, the Isley Brothers are returning to the Soul Train Cruise in 2020 and we’re more excited than ever. Did you know that “Shout” turns 60 this year, and we still can’t get enough of it? Apparently, neither can Ernie Isley, who laughs in delight whenever he walks past a wedding reception and overhears the iconic song. Their rare talent for writing and recording songs that generation after generation fall in love with will be on full display when we set sail next year. Just how fresh is their music?

The Isleys first released “Shout” in 1959 and over 50 artists - from The Beatles to the cast of television’s “Glee” - have covered it ever since. And that’s not even counting the 54,000 football fans at the University of Oregon who go wild when the song blasts through the stadium at the end of every third quarter.

Hip hop artists have also been keeping the Isley sound streaming into the ears of new generations, with folks like DJ Khaled (featuring Fat Joe and Raekwon) sampling “Ballad for the Fallen Soldier” for their “Billy Ocean” in 2017, “Hello It’s Me” popping up in “Hello” by Erykah Badu and Andre 3000, Kendrick Lamar using “That Lady” for “I” and the Notorious B.I.G.’s classic “Big Poppa” written around “Between The Sheets.” “One of my favorites is Ice Cube’s ‘It Was a Good Day,’ that sampled ‘Footsteps in the Dark,’ Ronald Isley told Ebony magazine. “That record knocked me out, as did the “Big Poppa” song Biggie did. The Isley Brothers are the most sampled artists in the business; I think James Brown is second. Maybe the Funkadelics are third. Hey man, I’m just glad we influenced the rappers that much.”

Even movie fans of all ages fall in love with the Isley Brothers, whose songs have been staples in Hollywood hits for decades. Most recently, both “Between the Sheets” and “Big Poppa” got audiences grooving during the basketball hit, “Uncle Drew,” last year. In 2017, they lent “For the Love of You” to the Taye Digg thriller “Til Death Do Us Part” and “It’s Your Thing” lit up the “Smurfs” sequel.

And some of the most talented artists of the past six decades have personally introduced the Isley Brothers to their fans; Jill Scott, Jimmy Jam & Terry Lewis, Raphael Saadiq, Snoop, Lauryn Hill, Nas, the Wu-Tang Clan, Nelly, Patti LaBelle, Quincy Jones, Trey Songz and Rod Stewart have all collaborated with the Isleys, including Carlos Santana in 2017 and even a young guitarist named Jimi Hendrix in 1964. “We like making new music and that’s allowed us to change with the times,” Ernie told the Philadelphia Voice newspaper.

When the Isley Brothers take the stage again on the Soul Train Cruise, every fan in the audience – young, old and in between – will relive memories that cross more than half a century. Now that’s something to Shout about.