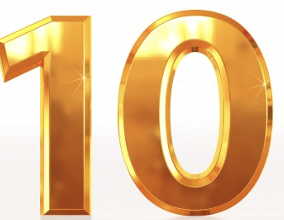 We’ve been thinking about the number 10 a lot these days, as we start to make plans for all kinds of ways to celebrate our 10th anniversary next year. So, we put together a list of 10 amazing moments in Soul Train’s history to share with you, some that changed the show, some that changed the world, and some that just plain blew our minds.

1. Soul Train originated in local Chicago high schools. The idea for Soul Train first started out as a concert tour that Don Cornelius took to different high schools in Chicago before re-creating it for television.

2. There were two Soul Trains at the same time. When Don Cornelius first moved to Los Angeles to launch the syndicated version of the show, the local Chicago series continued at the same time for a short while.

3. A black-owned business helped bring Soul Train nationwide. It was Chicago’s own Johnson Products Company and their sponsorship that helped Soul Train grow from a local TV show into a national phenomenon.

4. Black talent was everywhere. Don Cornelius came up with the concept for Soul Train’s iconic animated opening and he brought in black creators to illustrate and produce it – a first.

5. It wasn’t just about the music. The biggest comedians in the world passed through the Soul Train studio. Richard Pryor was a guest host and so was a young Jamie Foxx.  Foxx would later pay homage to his time on Soul Train (and to Don Cornelius) with Migos in their music video “Walk It Talk It.”

6. LL Cool J is on his way to earning the “EGOT of Soul Train”. He performed on the show 6 times, came to so many Soul Train Music Awards that they made him the co-host twice, he co-hosted the Soul Train Lady of Soul Awards and even showed up to the Soul Train Comedy Awards.

7. 10 is the magic number. LL still has a way to go before catching up to Al Green and Atlantic Starr, who have both been on Soul Train 10 times.

9. There was nothing else like it. Another performance we’ll never forget was when James Brown’s adorable young daughter Deanna joined him on stage with matching outfits and wowed the world with her dancing skills.

10. About that Soul Train Line…Jeffrey Daniels once went down the Soul Train Line while doing a handstand on a skateboard. He and Jody Watley staged a fight that was so realistic that other dancers tried to pull them apart. And then there was that time he danced with a mannequin...

What are some of the amazing Soul Train moments that you best remember? Share your favorites with us on Facebook.