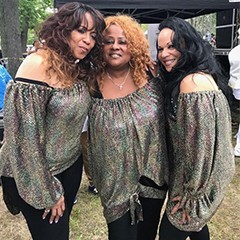 American recording artist Val Young (also known as “Lady V”) who achieved her greatest success during the 1980s. Born in Detroit, Michigan, Val Young first captured the attention of funk musician, George Clinton. She then went on to sing background vocals for greats like The Gap Bank, George Clinton, The P-Funk and Roy Ayers. It wasn’t until 1980s that the Pop Funk superstar, Rick James was deeply impressed by her beauty and musical talent. James promoted her as the “Black Marilyn Monroe” and signed her to Motown Records shortly after, where he helped produce her debut album, Seduction, which was released in 1985. Seduction became her first gold album and included some of her all-time hits such as “Mind Games,” “Piece of My Heart” and “If You Should Ever Be Lonely.” She released her second album, Private Conversations, with Amherst Records with three songs produced by Rick James.

One of her most memorable collaborations is “To Live & Die in LA” featuring Val Young and the late Tupac Shakur with whom she shared a very special working relationship. She has also worked with the original members of Rufus which included Kevin Murphy and Tony Maiden.

She has appeared on various soundtracks including: A Fine Mess (1986) Boyz in The Hood (Ice Cube), True To The Game, Indigo Blues, “Missin U” with Phred Mosbey, Anutha Music Company, Treat Her Like A Lady (Gospel Play) featuring Hawthorne James aka Big Red from the Five Heartbeats – where she also was the Assistant Music Director for the background vocals in the play.

Farah Saraya Melanson, Los Angeles native, majored in music and has played multiple instruments including the violin, bass, clarinet, cello and flute. She has worked with many artists including The May Jane Girls featuring Val Young, New Birth, Jon B and has recorded with Barry White, Grady Harrell, and The 3 Elvis Sued. Farah has worked with the group The Buck Ram Platters and The Marvelettes. Farah has also been working with Val Young and Candi Ghant of the Mary Jane Girls for the last four years.