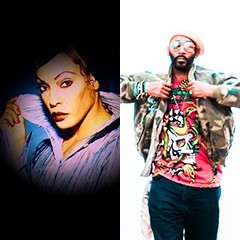 Patricia Davis was born in Texas, and grew up in Los Angeles. Her talent was detected during Gospel Singing. Soon she was on stage with well known artists, such as Diana Ross, Chaka Khan, Tom Jones, Aretha Franklin, Natalie Cole, Pointer Sisters, James Brown, George Benson and many more. Traveling throughout the world, such as Japan, Mexico, Australia, Hong Kong and the USA doing shows and TV performances earned her reputation as dancer, choreographer, singer and actress. She got a lot of recognition as dancer in the TV series "Soul Train”, where she became known for her special flair of fashion styles: flowers, butterflies in the hair and so on. Her solo performing career started in Austria, where she traveled throughout Europe. Her high energy and presence on stage are impressive. Her music is available on CDs, such as “Choose Your Future”, Love is Gonna Last", "MaMaRina" and “ Kahlua Sun” with the group Essence.

Derek Fleming a featured dancer on the long running television series, “Soul Train” for 13 years was born in Texas raised in Southern California. Derek aka ~ DFox*, started the trend of wearing foxtails as an accessory on his television wardrobe to stand out…and it caught the likes of many famous personalities like Madonna, Grand Master Flash and as recently as Chris Brown. Designers such as Louis Vuitton, Prada, and Versace have used fox tails in their ads and runways shows. Derek able to do most styles of street dance also choreographed many of the opening dance routines and closing segments on Soul Train. Derek is mentioned as one of the ICONS of SOUL TRAIN, featured in books and documentaries.