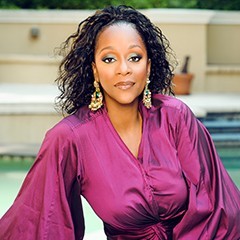 “I’m amazingly blessed. I will never ever say that I’ve lived the perfect life to be shown such favor with God or the people but here I am,” declares the incomparable Regina Belle. The Academy Award-winning and Multi Grammy-winning singer, songwriter and actress, with a string of hits including Make It Like It Was, If I Could, Baby Come To Me and This Is Love, Regina Belle has made a career following her heart and moving gracefully between the worlds of R&B, Gospel and Jazz..

She is an entertainer of immeasurable musical talent. This New Jersey native has earned distinction as an international treasure. Her luminous vocals on the Peabo Bryson duet, A Whole New World, (Grammy’s Best Pop Performance by a Duo or Group in 1994) solidified her place as music royalty.

Belle’s vocal abilities were demonstrated at a young age, with her first solo at the age of 8, at Friendship Baptist Church in New Jersey church pastored by her uncle, the late Dr. Fred M. Belle, Jr.. The entertainer’s natural gifts were further polished at Dwight Morrow High School and the Manhattan School of Music for Preparatory College where she studied classical voice training with Inga Wolfe. Although having received a full scholarship to attend Manhattan School of Music, she opted to aim her sights on the elite Rutgers University to study both Africana Studies and Music.

In 1985 Belle left Rutgers University, her senior year, just 15 credits shy of completing her degree, to go on the road with the Grammy Award, World Renown Group, THE MANHATTANS. She remained with them for two years before being spring boarded into her own career.

Thirty years after leaving Rutgers and 10 albums later, Belle started taking online courses, which earned her Bachelors Degree in Africana Studies and a Minor in Music. Belle walked the stage with her ‘new class’ from Rutgers in May of 2015. She states; “This achievement of finishing my degree which I started almost 30 years ago and finally being done, was a bittersweet moment and rates as high as my Grammy Awards.”

Her life was eventful, journey purposeful but not without misfortune. After releasing her first Gospel album in 2008, Love Forever Shines with the hit single God Is Good she was diagnosed with a brain tumor. This devastating news came at the height of her gospel career. After two surgeries and 10 months rehabilitation, Belle found herself back at the top of her game ready to take on the world.

Belle’s life experiences and health challenges have made her a champion in area of care-giving, affording her opportunities to wear different hats. She is honored to represent AARP as a spokesperson for caregivers.

Belle has enjoyed career success for which many entertainers can only pray. She can also give thanks for a blessed personal life. She has been married to former NBA player, John Battle, since 1991. The couple has raised five children and blessed to have 3 grandchildren. Rev. John Battle serve as Senior Pastor and Belle, working along side of him as an ordained minister, First Servant and Minister of Music of their two churches: New Shield of Faith Worship Center in Atlanta, Georgia and Spread the Word Ministries in College Park, Georgia.

With her latest release, The Day Life Began, Regina Belle is affirming that her journey continues and that her new recording signifies yet the beginning of an exciting new chapter. Regina concludes, “I draw strength from knowing that I’m operating within the purpose for my life and I’m having a ball doing it!”

Regina’s goal is simple, “If I cannot identify with the songs, and if the music does not move my soul, make me feel better, take me up when I’m down or higher when I’m up, then I don’t want to record it, play it or sing it!”