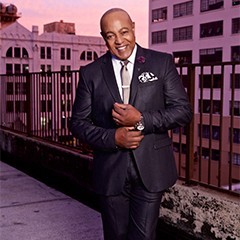 Peabo Bryson, the legendary voice of love, is back, and music has never been happier.  Peabo is not just “back”, he is back and collaborating with powerhouse producers Jimmy Jam and Terry Lewis for his 21st album titled “Stand For Love. This music dream team has delivered something music and music fans didn’t know was missing… R&B HITS.  The lead single off this 11track masterpiece, “Love Like Yours and Mine,” makes it clear that Peabo is better than ever. The second single, “All She Wants To Do Is Me”, has already been featured on the Showtime hit series “The Chi”. Peabo’s smooth delivery orchestrated by Jimmy and Terry’s flawless production has made this single an instant groove classic that is familiar to Peabo’s seasoned fans but has also caught the ear of some new ones. “Stand For Love” is an anticipated and epic return to popular music by one of the industry's most gifted and cherished voices.  The legend is back.

Born Robert Peabo Bryson on April 13, 1951, in Greenville, South Carolina, this world-renowned balladeer got his start as the lead singer of Al Freeman & The Upsetters and Moses Dillard & The Tex-Town Display. In 1976, he released his debut LP, “Peabo”, on Atlanta’s Bullet/Bang label. Peabo composed nearly all the songs for this album (some with the great Thom Bell), in addition to a young Luther Vandross being among the background vocalists, and sexy Black film star Tamara “Cleopatra Jones” Dobson showing him love on the back jacket.

Peabo had back-to-back gold albums with Capitol Records, Reaching for the Sky (1977) and Crosswinds (1978).  The title tracks of these albums, as well as the hit singles “Feel the Fire” and “I’m So Into You”, truly penetrated the hearts of soul fans everywhere. During his relationship with Capitol, Peabo collaborated with label mate and friend Natalie Cole for the 1979 project “We’re the Best of Friends”. A year later he worked with the phenomenal Roberta Flack for the double-LP “Live & More” (on Atlantic Records).  Peabo delivered four more albums for Capitol before making a second, even bigger album with Ms. Flack titled Born to Love, a gold seller that featured the smash “Tonight I Celebrate My Love” (Top 5 R&B and #16 Pop). Peabo soon moved over to Elektra Records for four albums, the second of which, “Take No Prisoners” featured the crossover smash “If Ever You’re In My Arms Again” (Top 10 Pop and R&B).

A return to Capitol in 1989 for the one-off album “All My Love”, earned Peabo his first R&B #1 single with a remake of the late Al Wilson’s “Show & Tell”. He hit the top of the R&B charts a second time with the smash “Can You Stop The Rain”, the title track of his R&B chart-topping first of two albums for Columbia Records.

It was with the help of very famous Disney animated films that earned Peabo his two Grammys and the songs two Oscars®. The first was 1991’s “Beauty and the Beast” with international pop singer Celine Dion which also topped the pop chart. The very next year, Peabo struck gold with a Grammy® and an Oscar® with Regina Belle for “A Whole New World” (Aladdin’s Theme) from Aladdin. Since these two milestones, he has been even more sought after as a guest vocalist and duet partner, resulting in work with Tony Award-winner Lea Salonga on “We Kiss in the Shadows” (#1 on the Classical Crossover chart from a new recording of “The King and I” score) and Kenny G’s “By The Time This Night is Over” (from the chart-topping Contemporary Jazz CD, Breathless.

Peabo has since also starred on stage in the lead role of “Raisin,” as The Wizard in “The Wiz” and was featured in the Michigan Opera’s 100th-anniversary production of “Porgy & Bess.” He also released a whopping three Christmas CDs, lovingly filled with music he’s performed for several years running in the annual touring holiday music extravaganza, The Colors of Christmas.

As Peabo continues to make feel-good music and sing about love, he encourages fans of classic R&B to have their voices heard. Leading an initiative called “The Choice,” he wants fans and advocates of classic R&B to actively support the genre. The time for complaining is over and albums like Stand For Love support the goal of this initiative. Choose Love. Choose R&B. Choose Peabo.

Beyond his own music, Mr. Bryson is looking to help nurture deserving new artists. “I'd like to find some serious talent and give them wings,” he states. “[“As far as I'm concerned, everything is going to get better,” Peabo concludes]. “I'm feeling like I’m in a really good place musically.”

With the lead single Love Like Yours and Mine released in April, the much-anticipated Stand For Love album will be available soon.