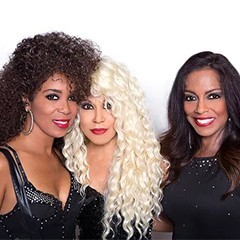 Three accomplished and vivacious women unite to form The Honey Cone featuring Shelly Clark. This talented triple threat comprised of Shelly, Kathy Merrick and Wendy Smith-Brune performs original songs from their catalog of chart-toppers and fan favorites along with hits from virtually every music genre.

An original member and co-founder of The Honey Cone, Shelly has an extensive and diverse career in the entertainment industry. Beginning as a beguiling child star, she exploded onto the New York scene as a gifted dancer, singer and actress. At the age of seven, she headlined at the renowned Apollo Theatre and the Palace Theatre before making her Broadway debut with Pearl Bailey and Diahann Carroll in the celebrated hit musical "The House of Flowers." She went on to dazzle audiences while touring nationwide with legend Cab Calloway in his renowned Cotton Club Revue. Shelly recorded and toured with various artists, including Dusty Springfield, Tom Jones, Little Richard, DJ Rogers and Richard Harris. She also toured nationally with The Ike & Tina Turner Revue as one of the storied Ikettes. With The Honey Cone, Shelly was part of creating an enduring legacy of Billboard No. 1 and Top 10 hits that garnered numerous gold records and esteemed industry awards. She has been married to Verdine White, the iconic bass player and co-founder of the Rock & Roll Hall of Fame inductees Earth, Wind & Fire, for 38 years and counting.

Born in Washington, DC, Kathy started her career at the tender age of eight in dance and musical theater. She attended prestigious Howard University and performed in local nightclubs and concert halls in the area, which included gigs with her talented brothers, The Merricks. She was one of the founding members of the exciting female trio Shades of Lace, which inked a record deal with Polygram. Kathy backed the Godfather of Soul, James Brown, on BET’s Video Soul, Soul Train, CNN Show Biz Today and Solid Gold as well as on stage at the famed Apollo Theatre. In addition to touring globally as a member of the captivating A.S.A.P., her vast touring and recording credits boast stints with Boz Skaggs, James Ingram and Tom Jones. For the last ten years, Kathy has toured extensively with the Sounds of the Supremes and other Motown acts, including the Temptations. Possessing a powerful three-octave range, the prolific songwriter and producer frequently collaborates with multidimensional musician and drummer John Paris.

Educated at Norfolk State University in Virginia, Wendy studied classical flute and performed with the local symphony. She moved to Los Angeles where her vocal talents immediately caught the attention of soul genius Ray Charles. In addition to touring worldwide with Charles as one of his Raelettes, she also worked with other illustrious artists such as Chaka Khan, Barry White, Michael Bolton and Sheena Easton. Wendy has been a featured soloist with many great bands, including The Count Basie Orchestra and soul quartet The Friends of Distinction. For many years, she has been the featured female soloist with The Glenn Miller Orchestra with whom she has performed globally. On the awards show circuit, Wendy has sung on the Emmy Awards, Academy Awards, Golden Globes and American Music Awards. Her wide-ranging musical talents span pop, R&B, jazz, soul and Latin music.