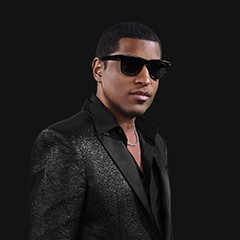 Kenny ‘Babyface’ Edmonds (born April 10, 1958) is one of the most celebrated creative forces in music history. As a recording artist, songwriter, and producer he has won 12 Grammy Awards to date. Babyface is the only producer to have ever won the ‘Producer of the year’ category four times, three times out of which was in consecutive years (namely 95-97). A record he holds to this day.

From humble beginnings in Indianapolis, Indiana, Kenny developed his love for music early on, when he began songwriting at the young age of 12. Upon graduating Highschool he went on to join the band Manchild and got signed to his first record deal. But it wasn’t until the 1980s that he joined the band The Deele, met his future LaFace co-founder LA Reid, and broke into the music world as the guitar player and songwriter of said R&B band.

Over the past five decades he released three consecutive multi-platinum albums: Tender Lover (1989), featuring the #1 “Tender Lover”; For the Cool in You (1993), which included “Never Keeping Secrets” and “When Can I See You”; and The Day (1996) featuring “Every Time I Close My Eyes.”

In 2014, he released the Grammy-winning album Love, Marriage & Divorce with the one and only Toni Braxton.

Currently, Babyface is working on his 11th studio album which has led him to work with a whole new generation of artists that include SZA, Kehlani, Ari Lennox, Ella Mai and others. He has also helped to reimagine Earth Wind and Fire’s song ‘Cant hide love’ with Lucky Daye.

Babyface has contributed to over 800 million records sold and over a billion records streamed. He produced and wrote 125 Top 10 Hits, 42 number 1 R&B hits and 16 number 1 pop hits. He won a total of 12 Grammys, being nominated 79 times.

Throughout his career, Babyface has won the BMI Pop Songwriter of the Year trophy seven times, received a total of 51 BMI Awards as well as 4 American music awards, 5 soul train awards, 5 NAACP Image awards and many more.

He also produced and co-wrote the Oscar-winning song When you Believe, sung by Whitney Houston and Mariah Carey.

In 1999, Kenny’s home state Indiana named a highway after him followed by him receiving a star on the walk of fame in Hollywood in 2013.

In 2017 he was inducted into the Songwriter’s Hall of Fame.

Babyface is a passionate philanthropist, actively supporting the Carousel of Hope which benefits the Children’s Diabetes Foundation, the Barbara Davis Center for Childhood Diabetes, Larry Ruvo’s “Keep Memory Alive, ” and Stand Up for Cancer. In the past he has also lent his support to FasterCures, VH-1 Save the Music, United Negro College Fund, the David Foster Foundation, and the Mike Milken Prostate Cancer Foundation.